Oracle Dataguard Far Sync instance is a new feature introduced in Oracle Database 12c, which simply works like a archive/redo repeater.. Far sync instance is something different than the Oracle Database instance, as its mission is accepting redo from the primary database and then shipping that redo to other members of the Oracle Data Guard configuration..
Far Sync instance is an instance without a database.. Although; it has controlfile, and capability to read from standby redolog files and write them into its local archive log files, Far Sync instance does not map any database file, in other words, does not have user data files, cannot be opened for access, cannot run redo apply, and can never function in the primary role or be converted to any type of standby database.. By the way; In order to use far sync feature, you need to have Oracle Active Data Guard license.
Supported Protection modes of Far Sync Instance are Maximum Availability and Maximum Performance.
In Maximum Availability mode, Sync transport method is used between primary and far sync instances.
In this configuration, far sync instance is placed close to the primary instance to reduce the network latency and to minimize the application latency caused by sync transport.. 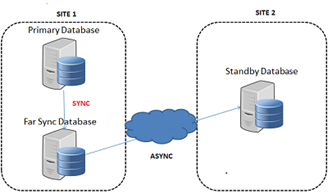 So, by the use of the sync transport mechanism, the redo information are transferred to the Far sync instance site with zero data loss. Once the redo is transferred to the Far Sync site, the Async method is used to transfer the redo to the Standby Site. This extends no data loss protection to more guaranteed sites located far away from the production site. (To extend the idea, you can use another Far Sync instance on the standby site like described in the diagram above)
So by using Far Sync, in a sense; we use the async and sync transform mechanism together, taking their most beneficial parts… We use zero data loss protection of the sync transport, and we use the performance of async transport to meet the business needs…
In Maximum Performance mode, Async transport method is used both between primary – far sync instance and far sync instance – standby instance..
The main advantage of using this method is that this method has near-zero performance effect.. That is , async destinations has near-zero effect on primary database performance.. Also there is no dependency to the application tolerance..
Far Sync instance can even compress the redo to be transferred to minimize the performance effect on the primary. Moreover; if you have more than 1 standby servers, there is no increasing performance effect on primary, because Far sync instance can service all the standby servers, as the primary server only has to service the far sync instance…